Skip to content
Today, in the absence of anything more interesting to write about, I thought I might just tell you about my day. Not today Saturday – as I’m posting this – because right now I’m probably just sitting around in my pyjamas, thinking about cleaning the cats’ litter trays. I’m choosing Wednesday just passed – as that was my day off and was the most dramatic and variable of my week. Well, I say dramatic… Anyway, usually on Wednesdays (since I am on my writing hiatus) I am to be found loafing around on my sofa, drinking coffee and trying to find a decent series or movie on Netflix. The Wednesday before was cool as I came across ‘Die Hard’ which I haven’t seen in years and years. And it really got me in the Christmas spirit, ‘yippee-ki-yay-motherf*cker!’. But this Wednesday, I had long ago pencilled in to meet my sister for Christmas shopping and lunch in Bristol (forget the Christmas shopping, it’s really all about the lunch). I probably only see my sister twice a year, so we always try to stick to our pre-Christmas meet up. And I had chosen this particular Wednesday because within a few days the ‘Christmas Markets’ will be in full swing (you know, those crappy little temporary wooden sheds that sell roasted chestnuts and useless presents [usually made out of wool, or something that needed to be whittled] that nobody really wants, and clogs up town with coachloads of tourists who travel for miles just to hang around some pathetic wooden huts!). I do despise the Christmas Markets, but I don’t know if I’ve successfully got that across. 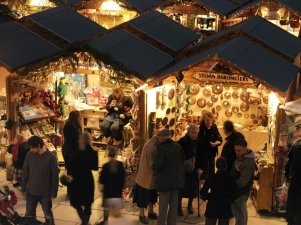 Before setting off, I thought I’d pop to the post office to send off a humongous parcel (a doll’s house I had just sold on eBay). I’d already pre-paid the postage online, so I was feeling pretty cocky. In I sauntered with my parcel that was only marginally smaller than me, when before I’d even reached the counter, the woman serving smugly stated, ‘we don’t take parcels that big’. And I sighed and assured her, ‘yes you do. You are listed on the Parcel Force website as a drop-off site.’ Then I proceeded to show her the email on my phone which proved this fact, which she didn’t like very much. In fact, I’m pretty certain they don’t like me very much at my post office. It’s actually a petrol station that has a post office section. And they seem to want to pick and choose what post-officey activities they are prepared to take on. But I never let them get away with it. I say, if you’re a post office, you’re a post office. Hence why they don’t particularly like me very much. Heigh-ho. My parcel was gone and out of my hands, so I didn’t care. I sauntered back out to the car park (parcel-free) and started the car. And that was when I knew that the day was not going to pass without difficulties.

As soon as the engine came to life, the car began revving spontaneously without my foot on the gas – at about three-and-a-half thousand revs. My car has been knocking around for years, it just keeps on going and going – but it has its little foibles. I whimpered, my heart sinking (car problems are very stressful) and proceeded to drive the car out of the petrol-station-come-post-office forecourt. Driving around for a short while, the car revving like mad even when sitting idle at traffic lights (it sounded like I was some boy-racer looking for a in vain for a race), I realised my car was never going to make it to Bristol. And since it was very early, I headed towards the garage to see if they would take pity on me and fix my car (even though it wasn’t booked in).

I think my mechanic, Andrew, is probably one of the grumpiest men on earth. I’m not too proud to tell that you I’m a little bit afraid of him. I’m quite certain he’s a good and honest mechanic, but whenever I pull up in my old Ford, he always looks like he might just kill himself – or me. I don’t think it’s the sight of me personally, I think Andrew has just had enough of life in general. Anyway, I explained the problem, Andrew had a little tinker with the engine, but couldn’t make it stop revving. So I knew right then and there I wouldn’t be driving to Bristol. The car was going to have to stay in the garage for the day and he’d see if he could fit it in between his other bookings. I asked in my most helpless female voice if he might happen to have a courtesy car spare, but Andrew just looked blankly back at me like I was completely insane. So, that was a ‘no’ then. The loan cars are like gold dust at my garage. Anyway, it was my day off, so being car-less wasn’t the end of the world, and I told him I was off to Bristol. Andrew kindly offered to give me a lift to the station (you see, he’s got a good heart, he just hates his life). So we set of in the most low-slung car I’ve ever had the displeasure of riding in – it felt like I could have done with being hoisted in and out. I’m no spring chicken, y’know. I really was only a couple of inches above the road. On the short journey, I asked how business was – like you do. Empty silences in a car with a man you barely know are never fun, and I’m pretty good at small talk. Andrew told me business was awful, and how he dreaded coming to work. He advised me how small businesses are pummelled by the amount they must pay out, and if you want to run an honest car repair business (which he does), you make no money. Which was depressing. Anyway, we bid farewell at the station and he mumbled some vague instructions about me ringing at the end of the day to see how the car was doing. I agreed, climbed out of the car in the most ungainly fashion possible, and waved goodbye.

The train-ride to Bristol was uneventful. It was so crammed with people I had to stand for the entire journey, but that’s to be expected early in the morning. And once my sister knew I was coming by train, she kindly offered to pick me up from the station. Result! It’s a twenty-minute walk from Bristol Temple Meads into town! I’m no spring chicken, y’know! But it was lovely to see my sister. The evil huts of the Christmas Markets were just being set up, but not selling their tat, so our day was not marred. Unsurprisingly, we did very little Christmas shopping (I think we only bought two presents each, and they were for our own children). We largely spent the day in two separate coffee shops and the rest of it in a restaurant for lunch. But you can’t really chat whilst shopping, I say – but you can whilst eating. And at least we avoided the throngs of people expected next week at the sh*tty sheds (aka the Christmas Markets). Did I mention my dislike of the Christmas Markets…?

Anyhoo, that was a day in the life of moi – just a little snapshot really. Not a particularly interesting snapshot, perhaps, but a snapshot nonetheless. And the car was fine, you’ll be pleased to know. Some hose had become disconnected and air was getting into the engine…or something…or some-such, I don’t know. I don’t listen. But the good news was that it only cost £35. Hoorah! See, I told you Andrew was an honest man – grumpy, but honest.