I’ve got to admit it, I’m just not in a good place this Christmas. No, it’s okay, I didn’t accidentally take a wrong turn and find myself in Swindon whilst frantically trying to buy some last minute presents. You don’t have to send out search parties and rescue me just yet. I’m talking psychologically and emotionally (I rarely find myself in Swindon). A recent bereavement, and a not-so-recent bereavement that I hadn’t previously dealt with, have taken their toll. This wasn’t the post that I had scheduled to write. That was a frivolous blog about cats. And who doesn’t like frivolous blogs about cats? But feeling the way I do, it seemed a tad inappropriate. I’m virtually writing this blog off-the-cuff, and I never do that. I usually write a post a week before it’s due, then edit a good few times throughout that week. So this this post will be a bit rough around the edges, and I apologise in advance. I was in two minds about writing this blog at all, but I just felt I had a few things to get off my chest. When I’m at my most desolate, my writing is largely unaffected. That and my appetite, that hasn’t been affected either. In fact, I’m pretty hungry as we speak.

I know what you’re thinking. ‘She looks alright to me. I saw her laughing hard at funny cat videos just the other week’. And you’re right. I’m sure I was chortling my guts up about some insane feline climbing up (and subsequently knocking over) a Christmas tree. I’m still able to see the funny side of life, I remain ever on the look-out to be first to the punchline. But I’m not my happy-go-lucky self either. And this melancholia has manifested itself in a fear of responsibilities; anxiety over expectations put on me. 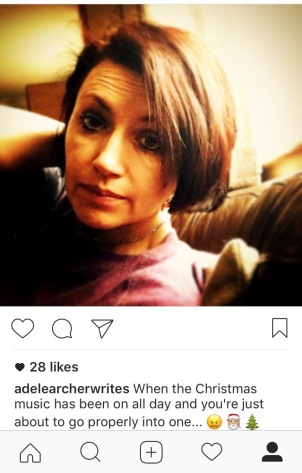 Did you ever bury something that you didn’t feel able to deal with? Did you ever put something in a metaphorical box and think, ‘you know what? I’ll come back to that later’. Well, I did – I thought I was pretty clever to be able to do it. To actually have the ability to compartmentalise something and store it out of sight, so that even I didn’t think about it. Really, for days and weeks on end. I didn’t even know I had that ability. But low and behold, I did. It’s funny what grief can make you do. But of course, that hidden box seems to have resurfaced – I knew it would eventually. These things can turn around and bite you on the bum. You don’t need to be Sigmund Freud to have predicted this bad patch, but I dealt with my loss in the only way I knew how at the time. If I had a fault (and I assure you, I hardly have any), it would be that I always feel I need to be the strong one. And I don’t believe in airing my dirty laundry in public (apart from on this blog, of course). So I don’t speak to anybody about anything – ever. But sometimes you need to be able to put your hand up and say, ‘everything is not okay’, or ‘I’m struggling a bit’. And that’s alright – it has just taken me five years to figure that out.

I’m being fairly cryptic, I know, but I’m not really at liberty to go into huge amounts of detail. Although I’d love to, there is always this overwhelming compulsion to pour my heart out on this blog. That’s why I love writing; you just have this inherent ability to say things that you could never normally voice in your daily life. But suffice to say, Christmas isn’t always the happiest time of year for everyone. There are lots of us that carry a burden every December. In fact, I think it’s partly because you’re expected to be so happy, that you literally can’t live up to that expectation. And guess what? Us bereaved people don’t own the rights to being miserable at this festive time of year. There are many despondent people out there, living with situations far more difficult than mine. Some people can’t even find a causal relationship between their experiences and their unhappiness, and I can’t help but think that must be even worse. At least I know what’s getting me down.

So, if Christmas is a difficult time of year for you – it’s alright to admit it. Sometimes, Christmas is overwhelming – if you’ve lost somebody or are just generally in a bad place (like Swindon). Perhaps this year, take that expectation to have an amazing time off yourself, and you just might. Well, it might be alright, anyway. Christmas Day is just a day. Personally, I’m sure I’ll be able to enjoy it. I’ve got some time off and that will give me the opportunity to do a few of the things I love; namely writing and reading – and being with loved-ones. Also, I adore how excited my daughters get at this time of year; that inability to sleep on Christmas eve, the mad rush to open their presents, and the thrill of getting together with their family. And what’s more, there’s tonnes of really nice food to eat – so that’s a bonus in itself. On the downside, I’ll be overweight again because of it, but let’s deal with one problem at a time. Baby steps. And don’t worry, I’m sure I will have cheered up soon enough; there are other, (potentially) funnier blogs in my arsenal – there will always be a few more gags up my sleeve. I like to laugh just as much as the next man/woman – and if it’s at my own jokes, then so be it. And if I can’t, well then maybe I can watch a couple of funny cat videos. There’s always that to fall back on, right?

PS: Apologies to the people of Swindon. I’m sure your town has its charms. Not many, but some.

PPS: This post of originally titled ‘Tears of a Clown’, but I decided that sounded as though I felt myself to be utterly hilarious (just a bit of a crier). I mean, do I look like the kind of girl who’d say, ‘you don’t have to be mad to work here, but it helps!‘. ‘No’, is the answer you are looking for.

PPPS: I don’t mean to be so flippant about the holidays when some people are experiencing real problems. Here’s a list of helpful UK numbers: –

17 thoughts on “In the Bleak Midwinter”