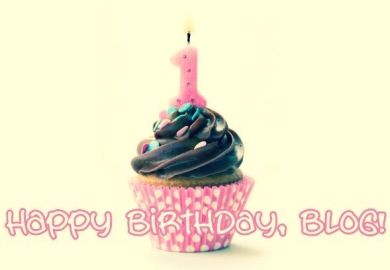 Hazzah! It was the first anniversary of the launching of my blog two days ago (I’m doing an awful lot of anniversary posts lately, note to self; must cut back on that. Hey-ho)! Anyway, where’s my present? Oh, I see…it’s like that, is it? Well, we’ll talk about the lack of gift issue later. But wonder of wonder, miracle of miracles, I’ve been on the blogging scene for a whole entire year – I know, hard to believe, ey? I mean, I realise it’s no great shakes to those of you who’ve been around writing posts for yonks but this is me we’re talking about and I never stick at anything!

When I started out on 11th Feb 2015, I hurriedly cobbled together a site which looked as though fashioned by a toddler on crack and posted some crappy ill-thought-out bit of information about the new book which had been out for a couple of weeks at the time. But even whilst publishing that first post I thought, I’m not going to survive very long in this blogging game if I continue writing self-indulgent posts about ‘the writer’s journey’. Don’t get me wrong, I do write about the act of writing from time to time because that’s what I do and it would be remiss of me to omit an entire facet of my life. But I try to keep it to a minimum unless I feel it’s relevant to my week (i.e. turning an eBook into a paperback, or how bloody hard blogging can be at times). So right at the get-go I knew there was only one avenue open to me. Yes, that’s right – mundane thoughts that had come into my head or (I think) amusing things that have happened to me, elongated into 1000 word essays full of rapier-like wit.

I remember at the beginning I was publishing a post practically every other day. I felt so inspired, I thought, I’ve got so much to say! I’ll never run out of ideas! Poor, deluded, misinformed simpleton that I was. I laugh at that idalistic naivity now. These days I realise that good material doesn’t grow on trees, and I’d rather miss my scheduled Saturday slot than write when I’m simply ‘not feeling it’. I’m all too aware that not every post I’ve ever published has been completely flawless (some crud will always make it through), but I know deep down when I’m happy with something or not. The trouble is, sometimes  I feel I’ve been quiet for too long and I simply must post something.

People write blogs for various reasons, it transpires. You’ve got those who have a certain expertise in a certain field, like fitness or food or fashion or photography or travel (I’m not one of those, I know nothing). Some use the blog as an outlet to exercise the mind and explore their creativity (either use it or lose it). And then you have those of us who’ve published a book and blog because ‘you’re supposed to’. Or at any rate that’s how it started out for me, but now it has very little to do with the book. The blog is an entity in its own right. It’s more a part of my psyche than any novel I could right because I’ve been telling you about my life, warts and all. Whether you want to hear about it or not.

Even as I write this, I realise it’s no biggie to have simply managed to maintain a task for a year. I’d probably have given up within weeks if I didn’t get such nice feedback. I actually thought I’d get ripped to shreds when I first started out – but that didn’t come to pass, for which I’m grateful. Hardly anybody ever tells me I’m crap which still mystifies me. And whilst I have everybody fooled, I make hay while the sun shines. Still, I might not be doing this in February 2017. Who knows where my path will take me? I know one very good blogger who has been around for years but was considering giving it up because it distracted her energies away from other projects she felt she ought to be focusing on. That could be me. What I’d like is to see the blog perhaps evolve into something else. Perhaps I could have my own newspaper column or something, or I could be writing content elsewhere. Or my book could go stratospheric and I just won’t have time to do this any more (excuse me, why are you laughing?) Or not. Maybe this is the pinnacle of my success. And you didn’t even bring a cake. Charming.

So I know a lot of you who read this are seasoned bloggers yourselves (thanks to you and the non-bloggers for being patrons of my unworthy blog all these months, you’re legends), but for those of you who aren’t, maybe you should think about giving it a go? They say everybody has a book in them, and even if that seems like too huge a mountain to climb, I’m certain everybody has a blog in them. You could bring something unique, something fresh and special to the mix that nobody else could. I have a good friend who is on the verge of becoming a blogger (a very good one, I’d wager) but something is holding her back, I think it’s the fear of failure. But I don’t think you can fail as such, and I keep telling her how supportive you all are. So come on people, give it a go. You’ve nothing to lose and perhaps a lot to gain. I’d read your posts, just make sure they’re filled with juicy gossip and the odd swearword and I’ll be a subscriber for life. Anyway, about that present..?