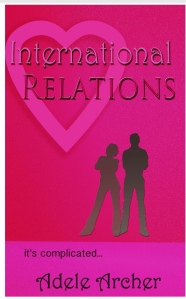 Well, day one. Not exactly D-day as I am very probably writing this and sending it out into an empty void but an author needs a blog (or so I’m told). My new book, ‘International Relations’ (when I say new, I mean I’ve been tinkering for ten years) was uploaded to Amazon Kindle a few weeks ago. And I’m just mustering up the courage to tell my friends and family what I’ve secretly been doing all these years!

I’ve been writing books since I was eleven, but only now that I’m forty-three *says mid-cough* do I feel it’s time to put something out there. Well actually, no the decision was made in 2011 when my gorgeous sister died of cancer at the age of forty-two. She was an amazing, beautiful person who achieved so much – but given more time, would have achieved so much more. And along with the grief and the angst and the anger, it taught me something. Life is short. That’s a huge cliché, of course, but unfortunately it’s true. We don’t know how long we’ve got; it could all be over tomorrow. Use the time wisely.So after another four years of pissing more time up the wall, I decided in early 2015 that I was ready as I was ever going to be.

So now it’s out there, making me uncomfortable. Something that was mine that isn’t mine anymore. What’s worse, I was never particularly adept at handling criticism, and everyone’s a critic, or so they say. But I’ve worked terribly hard, I’ve edited and edited until I can’t edit any more. I believe in this. I think I’m good at this. I just hope you agree…

One thought on “One Small Leap…”