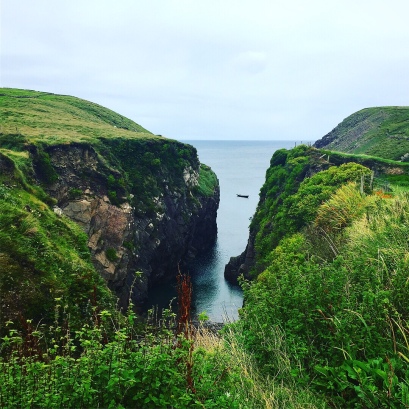 Hello! Remember me? I used to write a weekly blog roundabout these parts. I’m sorry; I needed to take a bit of a break from blog-land (apologies other bloggers too, I haven’t even been reading other people’s). I think I just got tired of the sound of my own voice (which, as longtime readers, is a sentiment that you will completely understand). If I’m entirely honest, I struggled to make a start on this post you’re reading now. But a chance remark from my daughter about how my mother-in-law’s sister (convoluted family tie enough for you?) about how she missed my Saturday morning blog spurred me into action. So, thank you, Biddy (you’re going to feature heavily in my next blog, I hope you don’t mind).

Don’t worry, there is a point to this blog (I find it hard enough to write with a point, let alone without one). I’ve just returned from a ten-day trip to Ireland, actually. It was just the break I needed – not that it was a restful holiday or anything – we’ve been driving around and visiting relatives like mad things. My husband is half-Irish, and his father’s side of the family are situated around the County Kerry area of Southern Ireland. I’m quarter-Irish myself; on my paternal grandmother’s side, but I’m ashamed to say we have no connections with that part of the family; I honestly wouldn’t recognise them if I tripped over them in the street. Anyway, my father-in-law was also back in Ireland after a recent illness, so we decided to take our annual August holiday there. And it really was a chance for my husband to relive his childhood, as he spent two weeks of his school summer holidays there annually as a kid. I’m afraid to say we weren’t met by fantastic weather (it’s at least four or five degrees lower even than the UK), but that didn’t spoil our fun.

I do love Ireland. The scenery is just enough at variance from England to know you’re somewhere entirely different. I love the space. I love the solitary little houses set apart on their own. The landscape is simply greener than England (probably due the excessive rain, and we get enough), and more undulating. On arrival in Kerry, the town of Tralee was all in a frenzy over the hurling final which was taking place about the time me were picking up our hire car (the staff at Europcar car rental had little interest in handing us over our keys in the excitement of listening to the match on the radio). For the uninitiated, hurling is a bit like hockey with a weird-shaped stick – but bears WAAAAAY more importance over there than hockey does in our country. Anyway, Limerick (who hadn’t won the final for over 40 years) beat Galway by a tiny margin. So flags were flying from houses and cars in every street. Perhaps even more importantly, at the same time, The Pope was making his first visit to Ireland since the 70s – and the country was all in a flutter about that too (you could even buy ‘Pope’ flags and t-shirts in supermarkets. You don’t get that in Tesco’s or Sainsbury’s). I can only wish I’d bought one. Oh, and then there was the ‘Rose of Tralee’ going on all week. It’s a bit like a beauty pageant or a ‘Miss World’ competition that has been running since the 50s, but covering all the counties of Ireland – and parts of UK, USA, and Australia too (for some reason). However, it professes not to be beauty contest – but let’s just say being attractive helps. Like my husband says, ‘you couldn’t be a right munter, could you?’ (I don’t know what that means either). We even went out at midnight to see the contestants on a parade in the streets just before the announcement of the winner (I would post a picture of her, but she didn’t look my way – so, y’know, her loss). And this was all followed by ‘midnight madness’ – which was actually just fireworks and unforgivable music played by a DJ, like ‘Cotton-Eye Joe’.

My husband’s aunt and uncle (Eileen and Jim) had kindly offered to put us up for the duration of our trip. I admit I was a tad anxious about it as I had only met them once or twice – and probably not for over a decade. But my worries were instantly alleviated as Jim and Eileen were just so friendly and accommodating. I just hope we were good house-guests (we only broke two of their showers, so I think we’ll be invited again). In fact, my husband’s Irish family (aunts, uncles, cousins etc.) were all so gracious. We were invited over for dinner by three separate families. You couldn’t hope to meet more genuinely approachable and affable people. And my children were so pleased to acquaint themselves with new family members they didn’t know or didn’t remember.

Like I say, we sure did some mileage during the trip. I really feel that we covered every inch of the county of Kerry. The coastline is simply beautiful (in recent years, it was christened The Wild Atlantic Way – very apt; never have I been so windswept). One day we ventured off on an hour-and-forty minute drive to Waterville to take part in a world record attempt – the largest number of Charlie Chaplins in one place. Chaplin used to come to Waterville every year for his holidays and his family still have strong links with the area. My youngest child dressed up as Charlie (it was the only outfit size we could find on eBay and we had to carry the bugger – bowler hat and all – in our already over-burgeoning suitcase). The current world record was set in Canada, and boasted well over six hundred Charlies. Unfortunately, Waterville was at least 400 Charlies short! But the weather was terrible and Waterville really is a bit off the beaten track. Ahh well, we made the local newspapers. My husband is particularly pleased as he is pictured proudly beside his drone.

Don’t get me started about that bloody drone. My husband has always been a keen photographer (the superb title photo is his) and, more recently, a videographer. But the drone is a new member of his arsenal. And yet another reason for him to stop the car, fish out and calibrate the drone, and fly the b*stard thing for fifteen minutes over something that has caught his eye – until the battery runs out (thank goodness). I shouldn’t grumble, really. The drone really does produce some wonderful footage. And he’s only crashed it twice – causing damage that has cost merely hundreds of pounds to put right. So, that’s something. He’s also making an ‘Ireland Video’ as we speak – so I’ll only see the back of his head whilst she’s at the computer editing for the next week or two…

But all too soon that ten-day break came to an end; back to reality. I can’t say I feel in the least bit rested as we were busier than ever. But it was a break from the norm and that was much needed. I trust we won’t leave it so long before we visit Ireland again. It’s great to frequent a place that you have real connections with. And I’ve made new friends – family, really – that I wouldn’t have made on any normal trip. It’s just a shame they now feel so far away. But it’s just a short plane-ride away. Even if you do have to trek nearly three hours to sh*tty (and horribly organised) Stanstead airport to get there. Still, it was worth it.

PS: To all my husband’s lovely Irish family (even though I don’t think any of you know of the existence of this blog), thank you again for your kindness; you are more than welcome to visit us in the UK. Our home is yours.

PPS: The Irish are universally worried about Brexit and think it was a huge mistake. I can’t argue with that…

PPPS: I would even consider moving to Ireland but for the fact that you have to remove your own hubcaps and hoover your boot before your M.O.T. (yearly vehicle inspection) – that’s just a deal-breaker.

8 thoughts on “Top of the Morning”

@_erinoneill_ and her first friend Monty, finally meeting up again last night at her 21st birthday party 🥳 Swipe ➡️So cute! Where did the years go? Thanks for the 📸 @nattiewhy ♥️ #twentyone #oldfriends #firstbestie #ourbabiesarentbabiesanymore