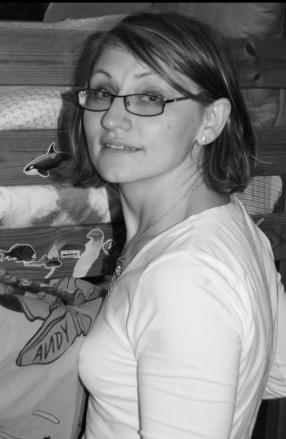 Today is the fourth anniversary of my sister’s death. We call it Lynn’s Day. Every year on this date I try to commemorate it in some special way but I have to say, every year ends up being the same; a bit of a farce. I usually like to find some Catholic Church (a place I never frequent any other time of the year) and go light a candle, have a little cry and allow myself to really think about her. That’s something I don’t do on a daily basis but I just can’t – or I wouldn’t be able to function; go to work or look after my kids – I’d just be a gibbering mess. One anniversary in the deserted church (whilst my husband was forced to ride off on his motorcycle in torrential rain to locate a local supermarket as some joker had forgotten to leave out any matches to light the candles), the effort of actually letting myself consider the enormity of what happened was so severe that I actually began to feel physically unwell. There were pains in my chest that hadn’t been there before so I had no choice but to quickly retreat home until the affects of stress had worn off. Another year, the silent church I had been hoping for just wasn’t to be – firstly I dropped an entire purse-full of small change incredibly audibly all over the floor (my youngest child was virtually crying with laughter over this). And once I had finally retrieved all the coins, lit a candle, composed myself and knelt down in a pew, in came an elderly cleaning lady with an industrial-sized vacuum cleaner and proceeded to loudly hoover the entire room. At precisely the same moment, a window cleaner propped his metal ladder against the wall outside, peered in at us, and began noisily cleaning the windows with a incredibly squeaky squeegee. Which, as you can imagine, was exactly the reverent ambiance I was after. So you see what I mean about ‘a farce’.

Maybe I’ll abandon the farcical church idea today. On this anniversary I thought I would try to honour her memory in a way that is more fitting, a better tribute from me. I am going to let you read the eulogy I wrote (and read aloud) for her funeral. It will make me cry to even look at it again (as it did to read it out loud on that fateful day) but that’s what today is about; fully registering and accepting what I have lost.

‘There’s Something About Lynn’ – by Adele Archer, Memorial Service May 2011

I’ve been asked today to talk for the family about Lynn. Now this isn’t going to be easy but I want you to bear with me. I’ve tried to keep it fairly light-hearted as Lynn would have wanted it that way. I was cajoled into making an impromptu speech at Lynn’s wedding too but it is an honour and a privilege to be asked to talk to you today. We all have our own little thoughts and memories about Lynn and I’d just like to share a few of mine with you.

Now some of you may be aware that Lynn had a few foibles that were charming and you just had to love her for them. One of these was an unhealthy addiction to charity shops. In a foreign, alien land, within the space of half an hour, Lynn would deftly be able to sniff out the best charity shops in the city. With her honed, keen senses she could skilfully hunt down the greatest bargains and the best labels – a feat most of us with our untrained eyes could only dream about. Unfortunately, her great love of charity shops could only lead to one outcome – an excess of clothes. Michael and Jacob will tell you that there is no property on this earth big enough to sufficiently house all of Lynn’s clothes. I do remember one particular instance of Lynn’s penchant for clothes and how they should be worn. She once knowledgeably advised me, “I never feel happy unless I am wearing two vests.” Of course, flummoxed and confused by this, I humoured her as best I could.

The clothes issue was only the beginning. Don’t get me started on the love of ornaments and knick-knacks and ‘things’. This was fuelled by the popular rise of DIY and make-over shows that Lynn watched with relish. Her knowledge of feng-shui and the alignment and symmetry of candlesticks on a mantelpiece was second-to-none. She once had a harmless squabble with my partner, Gareth, over a photo frame they both spotted at a car boot-sale. Unfortunately, on this instance, Gareth beat her to the purchase. Lynn smiled graciously, hiding the bitterness and resentment that must have torn her up inside. Nobody should ever best Lynn at a boot sale. I don’t think she ever truly forgave him.

We all knew Lynn as a gracious host. She loved to make a hot beverage for any guest stepping through her door and she had an amazing array of these. No hot-drink predilection was left un-catered-for. Her biscuit barrel famously overflowed with the most current and tastiest chocolate-covered treats money could buy. I particularly remember her long-time love affair with ‘Time-Out’s’. For an extensive period, I was offered these at an alarming rate (at half-hourly intervals, I believe). You would never guess it by her trim build that we all envied, but (like all Archer’s) Lynn did enjoy her food. At no other time was this heightened more than during her pregnancy with her son, Jacob. On the course of a three mile journey home, she was forced to stop off at various family members’ houses for snack-breaks to make it to her own front door.

Lynn had a fun and eventful life. I have been reminded by my sister, Ali, of a particular occasion, whilst they were shopping on a busy London High Street. Ali had spotted a metre-by-metre square of freshly laid cement blocking her path on the pavement and sensibly stepped around the square to avoid it. Lynn, however, blindly strode on through until she found herself waist-high in wet cement. The bemused and amused workmen nearby were forced to pull her out and hose her down in front of a growing crowd of passers-by. Lynn then realised she had haplessly left one of her very favourite silver sandals behind somewhere deep in the cement and was obliged to wade back in, only to be re-rescued and hosed off again by the bewildered workmen.

But sometimes Lynn did sensible things too. She met the love of her life, Michael, whilst visiting Ali in Birmingham on a college course. It was love at first sight. Her new life with Michael began – a man who gave her years of happiness and the strength to fight through her illness. And of course the result of this love was the birth of their cherished son, Jacob. Never was a child loved and adored so much.

So this is the hard bit. None of us wanted this day to come. If there was any justice in this world, none of us would be sitting here today. But I am learning that sometimes life can be unkind, unfair and cruel. Today we have to say goodbye to our beautiful Lynn who fought so bravely right up until the very end.

She was the adoring mother to Jacob, devoted wife to Michael, a loving daughter, a caring sister, a generous aunt, a kind sister-in-law, a supportive teacher and a wonderful friend to everyone…except TV presenter Zoe Ball (she didn’t like her very much…).

To Lynn; I will never wipe your amusing text messages from my mobile phone, I will never take down your pictures stuck by magnets to my fridge, there will always be six of us siblings – not five and when I look in the mirror I will always see part of you in my reflection. Live on in our hearts and memories and always know you will never be forgotten. We’ll all be together again one day and I know you will be waiting for us with a cup of tea and a ‘Time Out’. Love you forever.

NB: I did actually venture out with my kids to a church again today (against my better judgement). It was yet another odd one. I realised too late that the church had been overly-decorated with flowers on every pew; there was clearly a wedding taking place later. So I knew it was going to have to be an ‘in and out’ job. An extremely elderly priest with the bushiest eyebrows I’ve ever encountered ventured over to tell us there wasn’t going to be a mass today. I explained that was no problem and that we only needed a minute to commemorate the passing of my sister. He then proceeded to pray over us with his hands on our heads. Which was kind of him (he couldn’t be expected to know about my low-embarrassment-threshold). But the moment he had finished doing this, he decided to absolutely ‘leg it’ back to the vestry. I don’t know what the extreme hurry was – perhaps it was the impending wedding – but I don’t think a man of ninety (and I think that’s an underestimation) should ever run that fast. Oh Lynn, sometimes I think this might be you up there having a laugh…