I don’t pretend to be tech-savvy. But I get by. The daily website use and data inputting involved in my job, maintaining a weekly blog site; I’ve learned a lot over the last few years. But every now and then, I am tested to my very limits. Recently, even my sanity was endangered. Look at that sidebar to the left of this blog piece; for the uninitiated, these sections in the borders are called ‘widgets’. You can put whatever you like in them; a photo, your mini-biography, your favourite bloggers, advertising, your inside leg measurement – whatever you fancy. Now keep scrolling and look at the the lovely ‘FaceBook Page’ box and the cute-as-a-button ‘Twitter Follow’ box beneath it. You can follow/like me on FaceBook or Twitter by a mere click on the screen (and I installed those myself with the utmost ease). Then I got cocky and thought I’d like a nice ‘Google Plus Follow’ official badge so I could have the set (that’s another social media site – again for the uninitiated). So I’d like you to scroll further down the page and look at the red and white ‘G+ button’ (button – not badge) that I ended up with. NOW STOP LOOKING AT IT!!! It’s so utterly rubbish, it makes me want to puke my guts up! Bleuggghhhhh! That’s me throwing up because it looks so sodding bad!!!

This is a screenshot of how the widget was supposed to appear:- 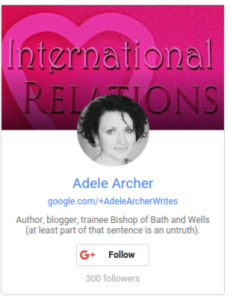 Nice, ey? But oh no, my blog-host site strips out JavaScript so I can only have the crappy red ‘G’ that you see and not one of these pretty things (I’m not going to explain JavaScript because you either know what it is or you don’t. And I don’t). They strip it out for ‘your security’. I didn’t realise my blog needed crack security – but apparently it does. Perhaps I’m being closely monitored by the Illuminati or aliens or something, I don’t know. I had no option but to next scour the search engines and the forums to see if I could find a quick fix. And apparently there was one (but it wasn’t quick). It appeared I was going to have to do some meddling and add some computer code in myself. Me? Add code? Do I look like Bill Gates to you? Somebody was supposed to provide an easy short-cut so I didn’t have to put any hard work in. But I needed this badge, wanted this badge, so I was forced to make a stab at it. This is an example of the simple, easy-to-use advice I was given:-

‘While WordPress.com doesn’t allow you to use POTENTIALLY DANGEROUS code on your blog, there is a way to post source code for viewing. We have created a shortcode you can wrap around source code that preserves its formatting and even provides syntax highlighting for certain languages, like so:

To accomplish the above, just wrap your code in these tags:

The language (or lang) parameter controls how the code is syntax highlighted. The following languages are supported:

If the language parameter is not set, it will default to “text” (no syntax highlighting).

Code in between the source code tags will automatically be encoded for display, you don’t need to worry about HTML entities or anything’.

And I said, ‘Ohhh, you just have to do that do you? And here’s me thinking it would be difficult! If only I’d known it was going to be so easy, I’d have sorted it out weeks ago! But hang on, my sock-drawer looks like all kinds of crap, I’d better just go tidy that up first…’.

Anyway, in the end I brought in the big guns (a couple of other friendly bloggers who were far cleverer than me – that wasn’t difficult) and they found it couldn’t be done either. Apparently it’s because I’m using a free blog-hosting site rather than the premium one which (if I wasn’t such a cheapskate) would allow all sorts of other options like plugins (no, I don’t know what that is either). Look, I write this blog free of charge; I do it for the love – and I find that taxing and time consuming enough so I’m not paying for the bloody privilege of writing this nonsense once a week! No offence. WordPress obviously do not know how tight-fisted I am…

So feel comforted that this blog does not contain any ‘potentially dangerous code’. We are all lucky to be alive, as I understand it. I apologise that I even thought about putting you all at risk just to selfishly make this blog look pretty. It should come with a disclaimer. Or be cordoned off with red and white tape. And I can feel mildly comforted that my horrible failure to make a decent G+ badge to your left there apparently isn’t to do with my complete ineptitude (which makes a nice change). I guess I’m just going to have to put up with that tuppeny-ha’penny G+ logo that couldn’t look any worse if I’d hurriedly torn the corner off a yellowed newspaper page that my cat had previously pissed on, allowed it to dry, found a passing toddler to scribble a rudimentary red and white ‘G+’ symbol on it with my nine-year-old daughter’s dried-up felt tip pens and stuck it on the screen with sellotape!!! I’m sorry, I am going to have to lie down with a moist flannel over my eyes due to a strange rage-related exhaustion that has suddenly come over me. I’ve no idea what brought that on.

NB: This is probably my last post as I imagine I shall be kicked-off by WordPress by next week for cheeky and downright sarcastic blogging. It was nice knowing you…