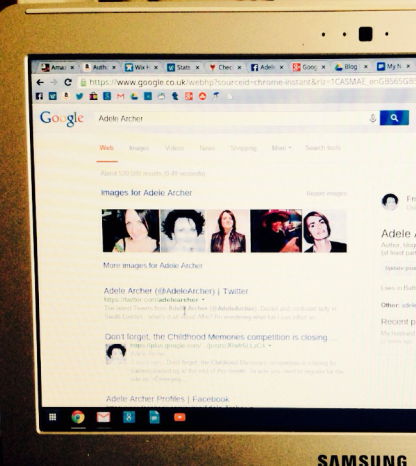 Do I win the prize for ‘the longest blog title of all time’? Yes? Great! Please send the cash-prize (along with the cash-prizes for the other blogging awards I’ve won which strangely, I don’t seem to have received yet) to me, Adele Archer. Well actually, that’s what I want to talk about in this post. ‘Adele Archer’ is my pen name (not my given name) and I have the need to explore this topic; what’s in a name? And do you know what I think? Perhaps more than meets the eye. For those of you above a certain age, you may or may not know the title of this post comes from the chorus of US rapper Eminem’s song, ‘My Name Is’ which I’d hoped looked into how important our names or pseudonyms are (being Eminem also goes by the name of Marshal Mathers III or Slim Shady). But it doesn’t. Which is a real pisser for me.

I always knew I would write under a nom de plume – and since Adele Archer wasn’t a huge hop, skip and a jump from my real name (and I love alliteration), my pseudonym wasn’t hard to come by. I realised I wanted to write with a certain degree of anonymity (although if you are my FaceBook friend, you’ll probably know exactly who I really am) because my life as a writer and my life as the real me are two very separate entities. And hence they require different names to fulfil their separate roles. When I first took on this new guise, I found it very odd replying to blog posts, G+, FaceBook messages and emails as Adele. Who are they talking to? Why do people keep calling me Adele? Oh, wait… I felt like a bit of a fraud. But over time, Adele and I have morphed into the same person and I feel quite comfortable being referred to as her because…well, I am her.

Have you ever Googled your own name? The answer, of course, is yes. Yes you have. When I initially took on the persona of Adele in January of this year and Googled myself, I was something like fifth on the search list. Down below Adele Archer off Twitter (who hasn’t tweeted for four years, I might add) and Adele Archer off LinkedIn who both always manage to muscle me out into the lower rankings. Do me a favour; Google my name. I try not to do this anymore (apart from for the purposes of taking the above embarrassingly bad picture) because my laptop knows who I am. And I fear Google tries to flatter me by putting me nearer the top than I really should be (ever the cynic). How far down the list is Adele Archer (yours truly)? I’m STILL not the top listing, am I? And I’d be hugely surprised if all those other Adele’s put themselves about on social media more so than I do. I’ve joined FaceBook, Twitter, Google+, LinkedIn, Reddit (stopped bothering with Reddit because it’s rubbish), Tumblr, Pinterest – you name it, I’m on there. Nobody ever threw themselves into the social-networking schmoozing game more shamelessly and with more zeal than I did. So ‘boom’ Adele Archer, senior fixed income and equity analyst with experience in project, corporate and property investments and management consulting from Tonbridge, United Kingdom off LinkedIn! How d’you like me now? Well let’s face it, you’re probably not especially bothered by me a since you are still higher up on the Google search list than I am…*sigh*

I’ve met people in the past who strongly felt they had been given the wrong Christian name. Their name depicted a type of person that they actually hadn’t turned out to be, they truly felt that having the wrong name was interfering with their life. I knew a girl at school called Eve. But she detested being ‘Eve’ and felt that Eve didn’t sum her up at all. One day she came to school and announced that we were all to call her Stacey (which was her middle name) because that was the name that would truly define her. But of course, it didn’t stick because we had all known her as Eve for years. Maybe she left school and went by the name of Stacey which was widely accepted – since the new people in her life knew her as nothing else, I don’t know. I was reading a BBC on-line magazine article on the increase of people changing their names by Deed Poll. In 2011 there were 300 brand new John Smith’s. Why would you rename yourself John Smith (possibly the most boring and innocuous name of all time – apologies all you John Smith’s out there – but it really is)? Or, even worse, why would you take on the name of a famous person, thereby cancelling out any individuality you ever had? These are things I will never understand. Okay, I have taken on the name of Adele but the name has personal significance for me (it wasn’t just plucked out of the air). And I did it for book writing purposes; it’s a pen name, not a legal change of name – the real me still remains. My individuality is still intact.

But the name you are given (particularly your Christian name) is definitely important. I took weeks over naming my second child. It’s not something you want to get wrong. My husband and I didn’t believe in pre-planning baby names and felt that the decision needed to be made when the baby was born. The child may not look like an Emily or a Freddy or a Scarlett. The child’s name would be borne out of the very shape of their face, the look in their eyes, the first inklings of their personality. For some reason, my first daughter’s name came easy, within a couple of days – her name found in a book and instantly we knew that was the right one. But we very nearly went up to the wire with my second daughter (to the point where you simply HAVE to name them or you get in trouble). For weeks she went around with the name ‘baby’ because that all-important name just seemed to be so elusive. The initial name we’d chosen, we couldn’t use, because it was one of those Irish names that sound absolutely nothing like their spelling (e.g. Aibhlinn = Evelyn. Excuse me, what..?). And we didn’t want her to spend the rest of her life having to spell her name for people. Finally, after much soul-searching and growing weary of other people bombarding me with the name that they felt she should be given, we plumped for something. It was a shortening/diminutive of the name on her birth certificate and it was fairly unusual (I won’t say what as my kids can decide whether or not they want to be involved in the world of blogging). Let’s just say you can’t find the name pre-printed on cups or bottles or name-tags for their bedroom door. And for months, I couldn’t help feeling we had made a bit of a mistake. Every time a friend or stranger would ask the pretty little baby girl’s name, I would be greeted with a look of perplexed confusion, an arching of the eyebrow, a slight tilting of the head and the name repeated back at me with an unmistakable questioning intonation in their voice. But as the child grew, she grew into her name, took on that persona and now really couldn’t be known as anything else. And she herself loves the name she was given. Phew.

So what is in a name? Would a rose by any other name smell as sweet? If it was called a buttwangler for instance? Maybe, maybe not. But you need to be comfortable with the name you were given, and if you aren’t – there’s nothing wrong with adopting a new one. As long as you can fully commit to it. And I’m quite happy to coast along being two different people – because really, they’re both me. And neither of them are sitting at the top of the search engine lists. Bugger.

NB: This blog post is intended to be tongue-in-cheek. No disrespect was meant towards Adele Archer off Twitter or Adele Archer off LinkedIn. In fact, think of it as a plug. I for one am loving your work!

I have one pair of comfortable flip flops. These are not those. 🕶🌞😎 #worthit #ipanemawedgesandals #ow #walktowork