I wrote this short post on an old travel blog in 2012 whilst travelling around Brazil. It was torturous to write because the bereavement was still so raw – but extremely cathartic to expel those feelings. I hope it stood the test of time. Thanks for reading…

I was hoping this blog would be more ‘Bill Bryson’ but it’s rather more ‘travel itinerary’ than I’d hoped. Today we did this, today we did that. So I’m veering off the travel course momentarily without being too self indulgent (hopefully).

My sister died a year ago next month, some of you will know, at the far-to-early age of 42. In the year she had from diagnosis of terminal bowel cancer to her death, I personally went from crying whenever I was alone (brave face for children in morning, sobbing on drive to work, wash face, brave face for patients, sobbing on drive home, brave face for children in evening, cry self to sleep) to keeping it completely contained. Somewhere along the line with the help of reading books and writing a little fiction, I managed to trick my brain into shutting it out, creating a little box for the grief and locking it for the most part. Compartmentalising it.

The little box of Lynn would be safely stored with only accidental openings caused by little unexpected remembrances.
But on the whole I had it under control. I had my routines to keep my ordered brain occupied. Up early, exercise, kids off to school, work, kids collected from school, dinner, baths, TV, book, bed. Routine was everything – routine kept the grief in its place in its box.

But now on our month-long travels around Brazil, all those routines have been disrupted. There is still a lot to do, planes and buses to catch, sights to see, copious amounts of sun lotion to apply, cafe’s to frequent and new foods to try. These things keep me busy but they are not my routines – they are a shift from the ‘norm’.
So the little box has sensed the vacant amounts of space in my mind and found room to open itself.

Now every day I think of her, many times a day. The need to speak to her, see her again grows greater and greater. Just to know she exists somewhere, not only as a memory is so strong it feels unbearable. The grief is so real now, it’s palpable.

I met an English woman taking a dip in the pool in the Pantanal. Her husband had died a year ago from a cancer starting in his thumb nail spreading to his bones. He had left her and two children – 8 and 12 behind. She was very matter-of-fact, almost jovial about it – not because she didn’t care but perhaps she had made her peace with it. Or perhaps a jovial manner was the only way she could discuss it. I don’t talk to anyone about the loss, I can’t talk to anyone as it means disturbing that compartment of my mind and I don’t want to open the floodgates. Maybe it’s a good thing I’m thinking about it so much. Maybe burying it was unhealthy but it was the only coping mechanism I could come up with.

Depressing bit done (do skip through readers). And apologies to my husband who diligently brightens these posts with his wonderful photographs. I suspect he would be hard pushed to find photos for this. Perhaps a nice sunset or sunrise or something… 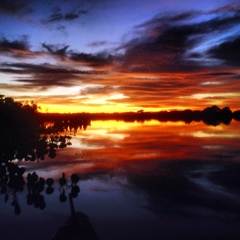