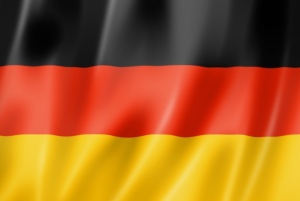 I’ve been putting this off as long as humanly possible, but finally my eldest daughter wore me down and we agreed that she could do the school German Exchange trip. The German child arrived in England last night and we duly took her home. Johanna seemed a little shell-shocked at first as she disembarked from the coach. I can totally understand that feeling; arriving in a new country after a long journey, thrown by the different architecture, the different sounds and smells.

After a short while in the house and the with the help of the children’s guinea-pigs to break the ice, Johanna seemed to settle in. It was then that we realised that for a nearly-fourteen-year-old, her English was really rather good. I did German at GCSE level at school (failed it) but only remember a few words and certainly can’t string a sentence together. I am so ashamed of my poor linguistic skills. I am a typical English person, too lazy to learn any other language but my own.

No, it’s not apathy, it’s lack of aptitude. I’ve just never had a flair for it. I can’t get my head around the grammar and the verbs and the placing of the words in the sentence. I think it’s because I don’t honestly understand how the English language is put together (even though I speak it and write in it well enough). I know how my language works, but I just don’t know why.

They say in the future, there will only be three languages; Chinese, Spanish and English (thankfully for me) because these are the most widely spoken. This may be completely incorrect but they say all the other languages will die out – like Latin. Which is sad for all those other countries but it isn’t my theory (so don’t shoot the messenger!). But all I want is to be fluent in just one other language but English. Just one! But which one shall I choose? Chinese or Spanish since they could be the only two other languages of the future? I’m utterly awful at learning new things so I’ve got to make the right decision!

I’m so tired of going to other countries and being too frightened to go into shops or cafés because the language barrier just makes me feel like a fool. And I can’t bear feeling like a fool. Even though I am (as far as languages are concerned). Being unable to communicate is so debilitating, isn’t it? I think this is why I’ve been putting off this foreign exchange – I was worried the child would have no English skills and I wouldn’t be able to converse with her. Luckily for me, she is pretty adept at it.

In a few months it will be my daughters turn to venture to Germany (then the exchange will be complete). Let’s just hope she doesn’t take after me as far as language-skills are concerned. She will be living with a German-speaking family for an entire week (apparently the parents speak very little English). My daughter is going to have to completely immerse herself; learn and learn fast. I pray that it goes well for her, I know she worries about it – like I do.

So to all you foreign-speaking countries, may I just apologise for myself and all my countrymen? Can I just state how sorry we are that we never put in the effort with our linguistic skills and just expect you to learn ours? I must do something about that before I die, I must learn a new language this year. THIS YEAR. And that’s what I’ll do, once I can decide which one – because let’s face it, I’ve only got the brain-power to master one. If that.